My business has used mailing lists for many years.  In fact, one of the first features added to our product was mailing list functionality specifically so we could discuss development and provide technical support.  Many products started out that way but today very few commercial products are supported in this manner.

Why is this?  As with most things, it seems to be a bit of a generational change.  Communicating on a public mailing list actually takes a fair bit of skill.  Those who do it often tend to take pride in their messages and put a great deal of effort into them.  You may be surprised by this but there is quite a big difference between a well structured e-mail and a hard-to-read mess. Much of this is fairly subtle, such as carefully formatting paragraphs so they wrap properly, and some complicated, such as inline quoting with brackets.

The problem is that unless someone has experience they tend either not to know how to do this or simply not to care.  Today when texting, SMS and Twitter are commonplace such textual niceties seem to be going out of fashion.  On a peer support mailing list, however, problem rise up.

In a manner reminiscent of Godwin’s Law, the proportion of traffic dedicated to complaining about post etiquette increases with the number of new members. It isn’t hard to understand both sides though, not that it matters much.  If you put a lot of effort into your posts, as experienced users tend to, it can feel insulting to be mis-attributed, incompetently quoted or just plain ignored by someone who can’t work out how to access an archive.  One undoubtedly becomes snippy when polite requests not to top-post become a daily routine. 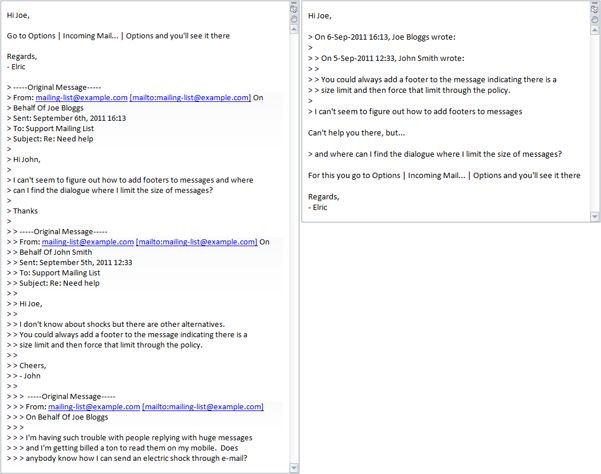 One of these posts has a lot of superfluous text, is harder to read and the answer is ambiguous. The other one is better. If you let Outlook teach you how to write in mailing lists, you'll produce messages like the one on the left. Actually I think many of you will prefer the first one because you get to read about electric shocks, but hopefully you get the point.

On the other side, however, it is easy to feel attacked when your first plea for help is answered first with what seems like a personal attack for not being “in” on the system.  This particularly hurts us when such newcomers are often potential customers.  One of their first experiences “with” our product is negative.  Has anybody done anything wrong?  Not really, but said potential customer walks away, never learns from the encounter and the next person comes along.  It doesn’t matter how much one explains all this in introductory posts because… well… people don’t read them and they are all pretty sure they know how to write an e-mail.

As a result, as much as I love mailing lists and appreciate our regulars who put so much time in to helping others, we have had to consider the other side of the community system: forums.

It is here that newcomers are made much happier and regulars are disappointed. Just about everyone knows how to use the forum and so there are few complaints about structure.  New users don’t even necessarily have to post as now they can easily search for the topic that concerns them and avoid that horrible interaction business altogether.  They’re happy.  I know this, because they say so.

We did this by starting an online forum and continuing to run the mailing list at the same time, for those who like it.  It wasn’t long before our regulars and experienced list members were disappointed.  Traffic on the list went down and very few wanted to bother with the forum.  Instead of just looking at the inbox of their favourite mail client, answering questions now involved having to periodically log into a forum.  Their involvement diminished.

This sounds like a problem.  But what actually went wrong here?  We made one group happy at the expense of another.  Did the new group have priority?  In a way, yes.  Not because it is fair or right but because this system is mostly designed to help users and those that needed help were happier.  Unfortunately those that needed help now get less of it as a result.

My solution has been to try and bring the community back together by building a module for phpBB that acts as a gateway between a mailing list and a forum.  The idea is that if you the web interface and search tools, you use it.  If you prefer to never have to log on to a web site and operate entirely in e-mail, you can do just that.  It will be interesting to see how this works out.